I was so long never go Orchard to do my busking (drawing caricature at the road side) due to busy of doing some researching stuffs. Basically Singapore had been raining often, if no wrong, last year totally having approximately 2 months was having smoke surrounding the country due to Indonesia’ s forest fire, and having 60% of the day was raining.

Usually during Christmas I may have some business while I draw at Orchard road, but this year, thought 70% (or more) of the days was rainy day (like today).
Thought this year will be a ‘Snowy Christmas’ in Singapore (I mean snowy = rainy).

Thought life was a bit tough, luckily covered by some event jobs to survive.
Posted by Two Hands Caricaturist and 1 cut 2 pieces Silhouette Artist at 3:34 PM No comments:

A client asked me to do a group caricature for their special guest. 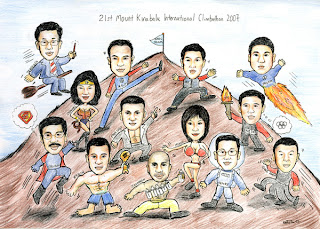 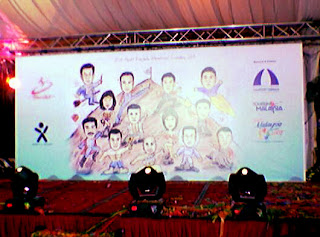 That was my first time saw my artwork became that BIG!!! Heehee!
Posted by Two Hands Caricaturist and 1 cut 2 pieces Silhouette Artist at 9:12 PM No comments: 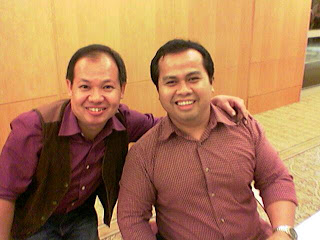 I met Yunos, Zaki’s brother many years ago, at least 6 to 7 years ago. Seldom see him until last year. He said he was married and based his business at Indonesia, not bad men brother!

Now met him during an event while they hired Yunos and I as their caricaturists.

Look at our ‘fatness’, am I looks like Yunos or Yunos looks like me?
He got more hair to me! Must go Beijing 101 or Yunnan Haircare or Stevenson?
Posted by Two Hands Caricaturist and 1 cut 2 pieces Silhouette Artist at 8:24 PM No comments:

Another event with make-up 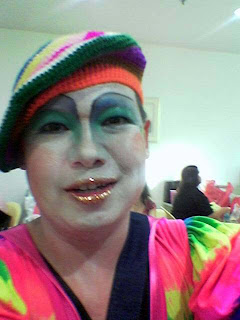 I thought I do not want to try any job with make-up any more, but last year-end had a Christmas series job, the event company hired some professional make-up artists to do it for their entire artist.

It was fun and excited! I met lots different artist like contortionists, mime, balloonists, magicians, foreign fashion models as well behind the stage! We are different from the public; at least this time my feeling was very different!

Ziv was the one who do the make-up for me; she’s the head of the make-up teams! She’s pretty and sexy!!! Please make sure to arrange such make-up artist for me for every event ok! Heehee! Thought my 'Uncle face' need professional make-up artist to handle lah. 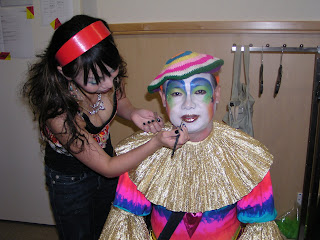 Taken this picture while Ziv’s assistants doing make up for the contortionist. 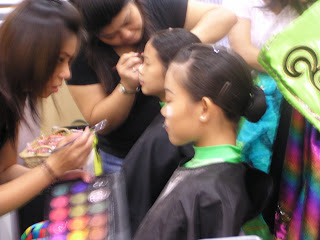 Ziv was doing the final checking and additional make-up for her. 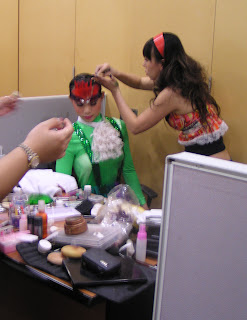 She’s the one! So beautiful! I should sing: “Your beautiful, your beautiful….”
Unforturnately did not get her contact. Ouch! 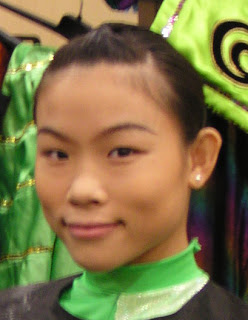 Met Vivien in the event! She was very beautiful as well! She had a very handsome and tall boyfriend! 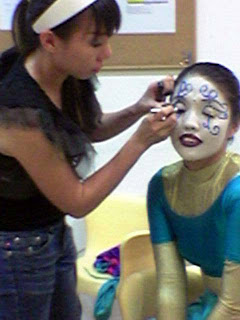 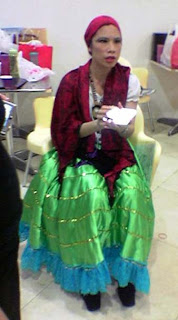 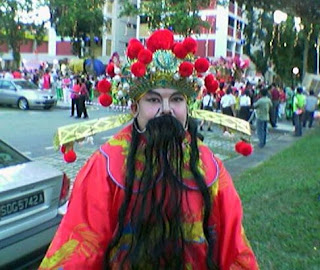 During many years doing caricature or silhouette cutting for event, I seldom asked to do any special costume or make-up, I am a small fly, some more as guy, as long as looks neat and tidy and clean, will be ok.

If really need special costume, usually provided by the event company and no need to do any make-up.

A friend in 2005 asked me act as Chinese treasure god character in their Chinese new year event, they provide with costume and make-up, which was my first time having make-up in my whole event life.

Ouch! If was painful when the opera master do a treasure god make-up on my face. I don’t like the time he paint the eyeliner on my eyes, it was uncomfortable. Anyway, just take it as an experience lah. Heehee!
Posted by Two Hands Caricaturist and 1 cut 2 pieces Silhouette Artist at 6:51 PM No comments:

Year end is peak period for events like dinner & dance, Xmas promotions etc.
It is a peak period of entertainer as well. Usually, the dinner and dance and family day happened at Friday night and Saturday. The event companies will hire fringe artist to entertain the guest.

During year end peak period, there’s always event companies looking for fringe art artists, jobs is waiting for us, that’s was a good thing for us.

Some people said our income must be very good, that’s not true, because after the peak period, not much job for us, it became artist looking for job to survive.

Due to more and more people joining in this line, the opportunities of getting jobs became less, it became very competitive, and this is good news for event companies, because they got more choices.

Lots artist lower their lower down their price to undercut the job, some event companies try their best to looking for the lowest rate artist as well regardless the artist’s skill level, as well, hence you can see lots ‘fake artist’ (non-skilled people) doing event.

Basically, the guest was not so concern about that due to the fringe art artist was giving free services or free gift e.g. Free caricature, free silhouette cutting (shadow cutting), free henna drawing etc, that’s why the standard of the fringe artist was not important maybe.
Posted by Two Hands Caricaturist and 1 cut 2 pieces Silhouette Artist at 2:43 PM No comments:

This is the boss of Virgin Airline, Mr. Richard Branson.
I like to display this drawing either when I doing event or do busking at Orchard road.

When someone asking who I drawn, I told them this drawing was Richard Branson, they could be reflected: “Doesn’t look like at all!” That’s common feedback as well.

Hmmm, I wonder why they could recognize that I am drawing Richard Branson yet the drawing doesn’t looks alike? Interesting! Haa haa!
Posted by Two Hands Caricaturist and 1 cut 2 pieces Silhouette Artist at 4:33 AM 4 comments:

One of My Good friend Rama Chandran

Rama Chandran, my ex-colleague who works in a bank together, was the person who brings me in to the entertainment line in 1990.

He was a part-time emcee at that time, his ambition was a movie director or run a movie production house or became an actor if I am not wrong.

All I remember was the scene that I watching Chandran doing comedy drama in shopping on the stage, that time Eileen Wee (now became emcee/model/writer and etc) was also acting together with him.

Rama Chandran is one of the famous people in this line during that period.
He was involve in Michael Chiang's hit comedy play, drama version of ARMY DAZE, in 1987.

Rama Chandran taught me lots thing, he is one of my best friend. He continuous runs his production house D’Rama Production after having his movie studies from New York, that’s about at leas more than 10 years ago.

Time fly very fast. Chandran had married and having a nice family.

10 years later, you will see me sitting at kopitiam having beer, when I became an ‘old uncle’.
Posted by Two Hands Caricaturist and 1 cut 2 pieces Silhouette Artist at 3:04 AM No comments:

Up to today, year 2007, the world had been changing a lot. I found that at least 10 more new caricaturists came in this industry to share this cake, hence the cake for event caricaturists became smaller and smaller.

Luo Yong from china, brought in her father Luo Rui Lin doing caricature, maybe she had been arranged her mother doing caricature for event as well by setting the lowest rate in this industry; then followed by Mr Kamal who just completed his master degree in Contemporary Art, and his wife, Roushi Ye, been ranked as ‘Singapore Florist Painting Artist’ and had been interview by TV Channel named ‘Suria’, and someone called Andy ( if I not wrong), followed by few more art students and fine art artists.

That’s good news for event companies that they having more choices, but bad news for caricaturists in this industry due to crowd with competitors.

When the government engaging more foreign talents, especially when the casino is opening, that will be more event caricaturist appeared in Singapore.

Just my personal view, haahaa!
Posted by Two Hands Caricaturist and 1 cut 2 pieces Silhouette Artist at 2:15 AM No comments:

A Rough Event Caricaturist List in Singapore from my memory

In 1992-1995 (rough memories) , artist who do caricature in event as I remembers like Eienstien, Eric Ng, Saik, then follow by Poon, and Desmond, may be Pak Ah Bee from Clark Quay as well.

Eienstien was the pioneer artist who do caricature in Singapore.
Then followed by Eric Ng, had been doing caricature for events and also doing he caricature at Orchard Point.

Eienstein was running his own company and doing TV productions now. Eric Ng, was not so active in recent years and had been emphasze in his own business..

1996 onwards, numbers of caricaturist increased, included Zaki, Yunos (both of them could be already doing caricature in earlier years), then followed by Diana and Belle Kwan.

Thought one of the full-time portrait artist, Chong Jit Leong of Portrait Workshop had been doing caricature for events as well during this period, I did not know him at that time, only heard about him, then artist doing portrait and caricature drawing at Clark Quay.

Followed by another full time portrait artist Reggie Wan of Portrait Studio, joined the event caricaturist industry, if not wrong, should be around 1997 or 1998.

Then another guy who very aggressive that like to promote himself, Lawrence. He had went to United State for his study since 2002 (if not wrong)

Wilson Lee, the artist I met about 1998 was doing event as well, then follow by William Lee that I met about 2002.

Up to 2003, that will be about 10 caricaturist (including me) in the event industry, maybe few more people that I does not know.
Posted by Two Hands Caricaturist and 1 cut 2 pieces Silhouette Artist at 1:38 AM No comments: 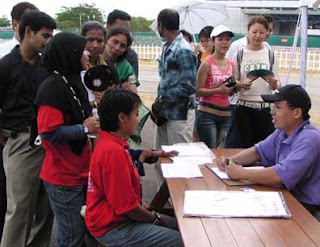 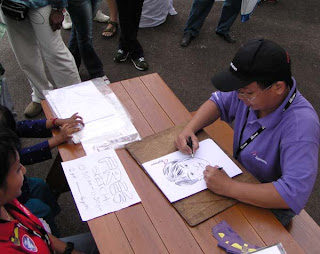 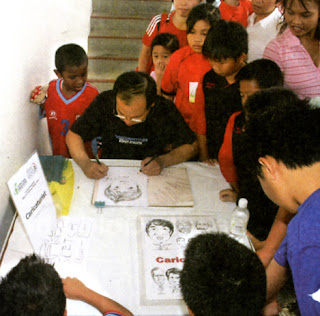 A guy draw using two hands? Yes, here I am (in Singapore).
In this insdustry, I am the only person who drawing using two hands since 1995.
They called it "Ambidexture".

I am not the best, but I always try to deliver the best to the guests and the organiser who hired my service.
Posted by Two Hands Caricaturist and 1 cut 2 pieces Silhouette Artist at 12:03 PM No comments: Before I became an Event and Party entertainer, I started as a crew that carry the event equipment such as big amplifier, wires etc, it happened that an event company asked me to do caricature for dinner & dance and family day, since then, I start as a freelance Caricaturist about 1992 until now.

Other then Caricature drawing, I start to do the Silhouette Cutting (Shadow Cutting) since 2002, and start to do Palm reading since 2003.

Entertainment line is a fun but also a very competitive business.

For more about me, you can view my website: www.geocities.com/wellessx
Posted by Two Hands Caricaturist and 1 cut 2 pieces Silhouette Artist at 10:25 PM No comments: